WASHINGTON—U.S. employers added jobs in December at the fastest pace since February and wages surged, suggesting the economy maintained strong momentum at the end of 2018 even as financial markets sank. 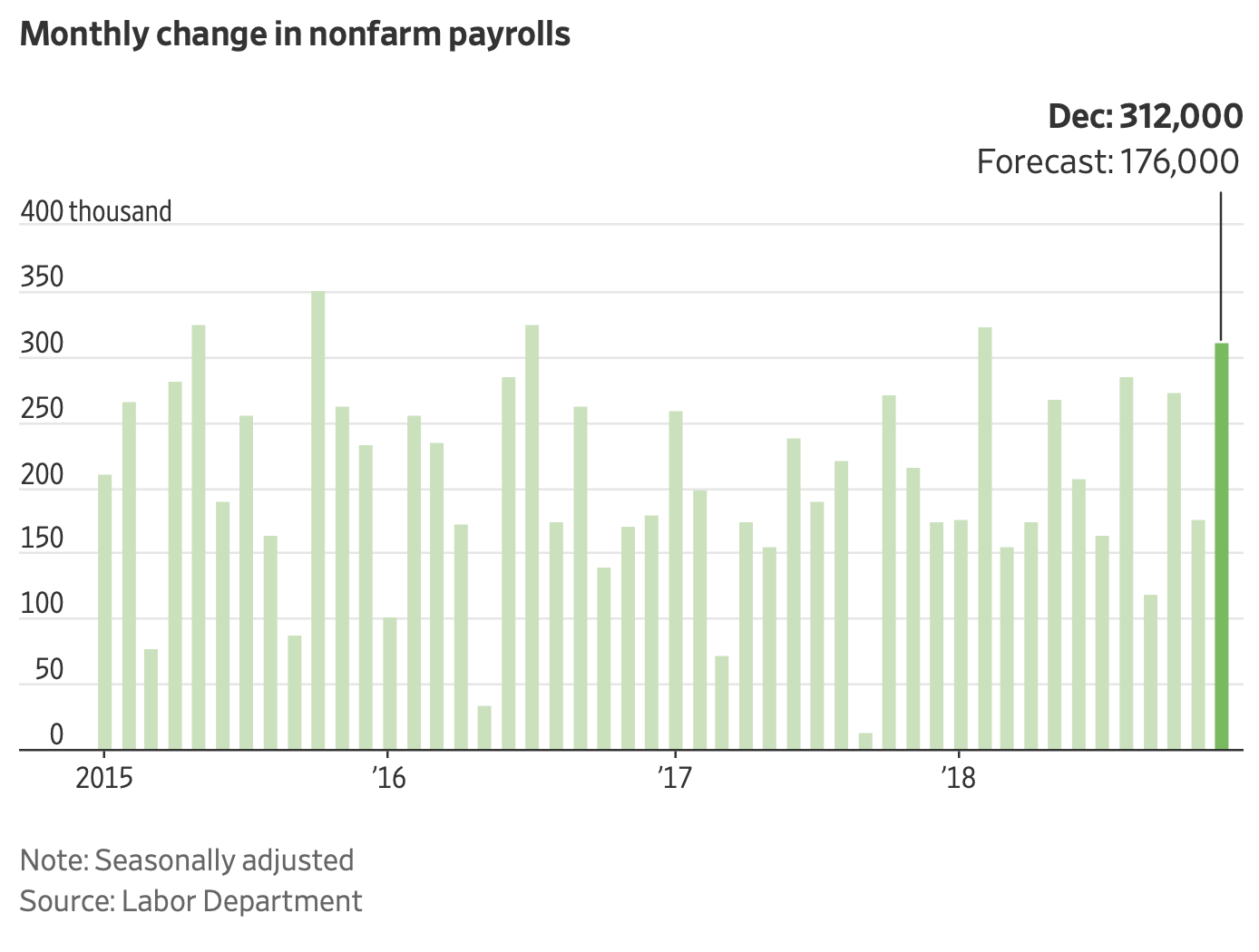 A separate survey of households showed the unemployment rate climbing to 3.9% from 3.7% in November, though this was mainly due to more workers entering the workforce.

Economists surveyed by The Wall Street Journal had expected the economy to add 176,000 new jobs in December, wages to rise 0.3% from November and the jobless rate to fall to 3.6%. 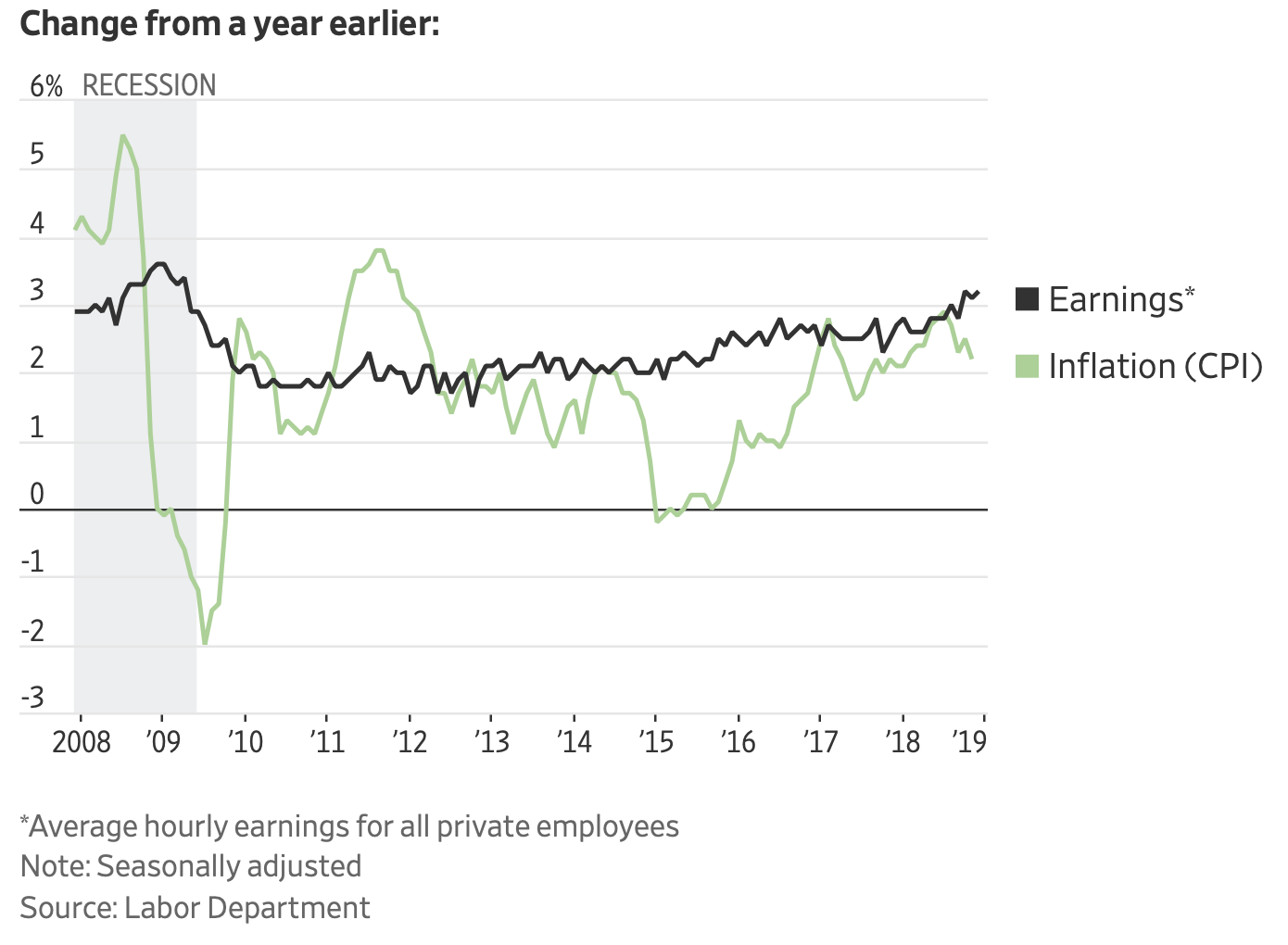 “I’m doing really good,” said Jessica Baldwin, 27, who paints houses for a living alongside her brother in northern Utah, where the housing market is growing. She said her business was strong all through the holiday season, when it typically slows, and that she’s considering starting a limited-liability company so she can hire more workers. “I have to turn people away because I don’t have the capacity to take on their work.”

Employers added an average of 220,000 jobs a month in 2018, running ahead of the previous year’s pace of 182,000 per month and the best job growth since 2015. This came despite a tighter labor market. More broadly, U.S. payrolls have grown for 99 straight months, by far the longest stretch of steady hiring on record.

In December, every private-sector industry except information added jobs, with some of the biggest gains coming from construction, education and health services. Payrolls at all levels of government rose by 11,000 last month.

Pay Raise
The annual growth in average hourly earnings for private-sector workers rose 3.2% in December.
Average hourly earnings for all private-sector workers increased 11 cents last month to $27.48. December was the third straight month in which wages rose more than 3% from a year earlier. That had not previously occurred since the recession ended more than nine years ago.

Helping to explain the uptick in joblessness, the labor force participation rate rose to 63.1%, matching its highest level since 2014, from 62.9% in November. Participation has been low by historical standards in recent years as the U.S. population ages, but economists say rising wages and good job prospects may be pulling workers back into the labor force.

A broader measure of unemployment, which includes discouraged workers and those working part-time for economic reasons, remained stable at 7.6% in December.

Jobless Rates
Unemployment rose to 3.9% in December while a broader measure including underemployment held steady at 7.6%. 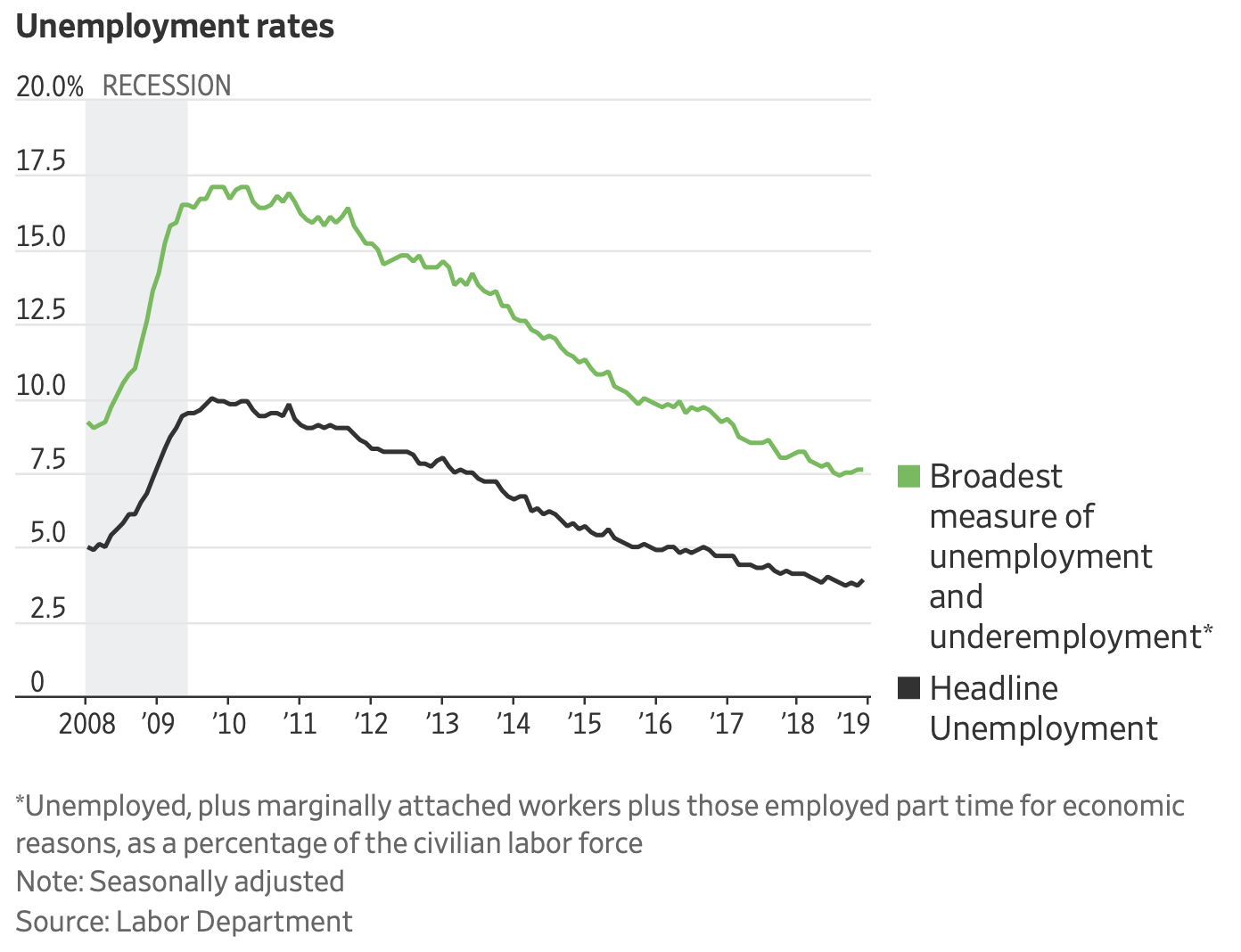 The latest employment figures provide a significant counterweight to recent signs of slowing momentum in the U.S. economy. But economists cautioned that the underlying data were collected early in December, before the federal government partially shut down and the recent selloff in financial markets accelerated.

A closely watched gauge of manufacturing activity posted its largest one-month decline last month since the 2008 financial crisis, the Institute of Supply Management said Thursday. Consumer confidence, though still solid, also fell sharply in December amid uncertainty about the economic outlook this year.

Tech giant Apple this week lowered its revenue forecast for the first time in more than 15 years due to ebbing iPhone sales in China. White House economic adviser Kevin Hassett said Thursday that other U.S. companies are likely to face growing difficulties in the Chinese market in the months ahead as the world’s second-largest economy slows amid trade negotiations.

The uncertainty has weighed heavily on financial markets. U.S. stocks in 2018 saw their worst yearly losses in a decade, with the Dow Jones Industrial Average closing Thursday almost 16% below its September peak.

Still, widespread employment and rising incomes can go a long way toward maintaining growth momentum in an economy where consumer spending amounts to more than two-thirds of GDP. Early data suggest retailers had their best holiday shopping season in six years, while inflation has remained remarkably tame despite accelerating wage gains and robust consumer spending.

If hiring remains strong and wage growth continues to accelerate in coming months, it could force the Federal Reserve to consider raising interest rates further in 2019 despite slowdown concerns. That’s because many policy makers believe higher wages eventually fuel inflation.

It has also made it challenging for some companies to find workers.

“Bigger companies like that that are in town are harder and harder to compete with,” Mr. Johnson said. “Everybody’s gotta keep up with the Joneses.”