Inventory down and sales prices up. - breakdown by property type:

To view data for every Essex County town, go to:  http://www.sullivanteam.com/Properties/Reports/Public/Charts.php

To dowload the full Housing Report go to: http://sullivanteam.com/pages/EssexCountyHousingReports 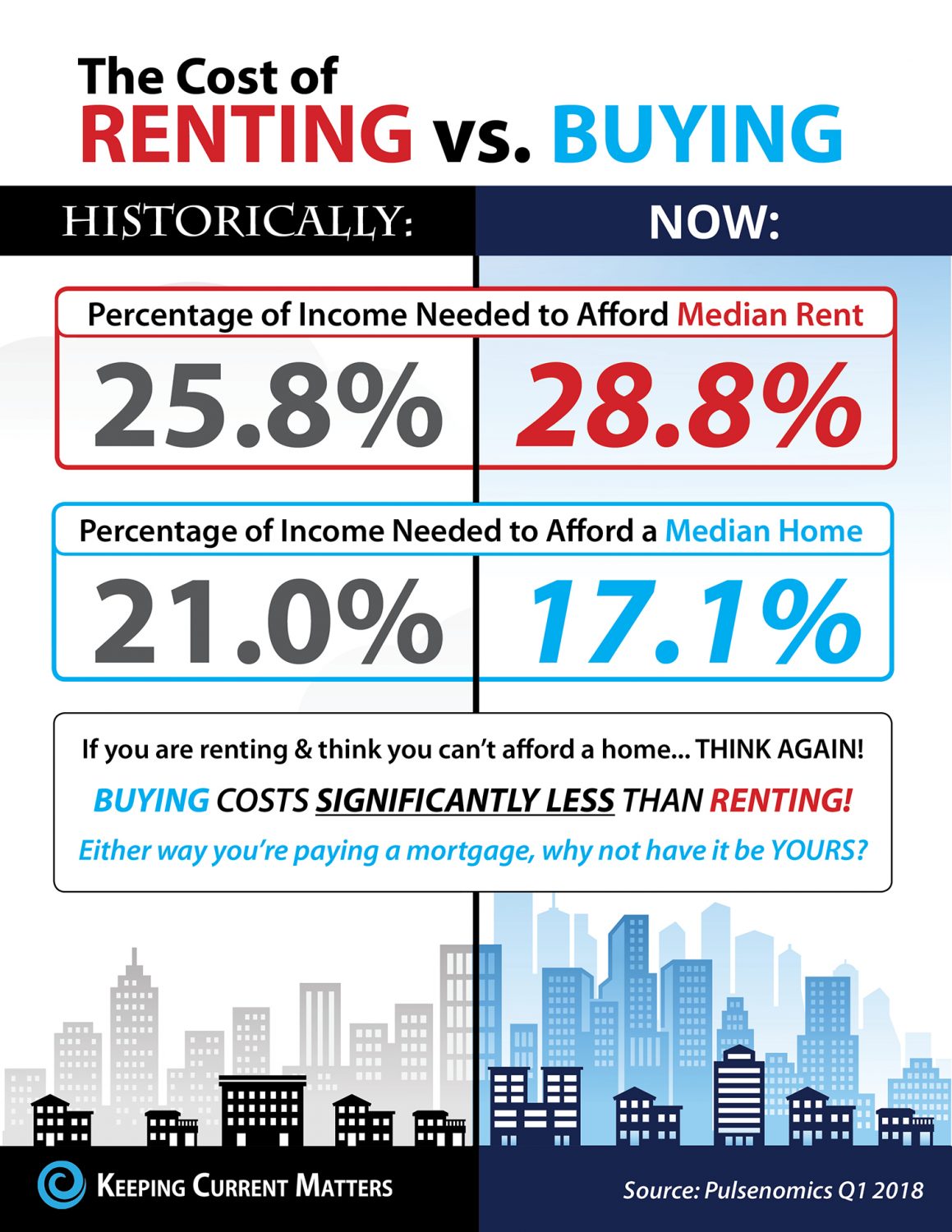 U.S. job openings rose to 6.7 million at the end of April, compared with the 6.3 million Americans who were unemployed

For the first time since such record-keeping began in 2000, the number of available positions exceeded the number of job seekers, the Labor Department said Tuesday, a shift that is rippling across the economy and affecting the behavior of employers and workers.

U.S. job openings rose to a seasonally adjusted 6.7 million at the end of April, a record high, and more than the 6.3 million Americans who were unemployed during the month. Openings had exceeded the available labor pool beginning in March, according to revised figures released Tuesday.

The figures are the latest sign the U.S. is facing a historically tight labor market. The jobless rate ticked down further in May to a seasonally adjusted 3.8%, the lowest since April 2000, the Labor Department said last week. The last time the rate was lower was in 1969, when young men were being drafted into the Vietnam War. 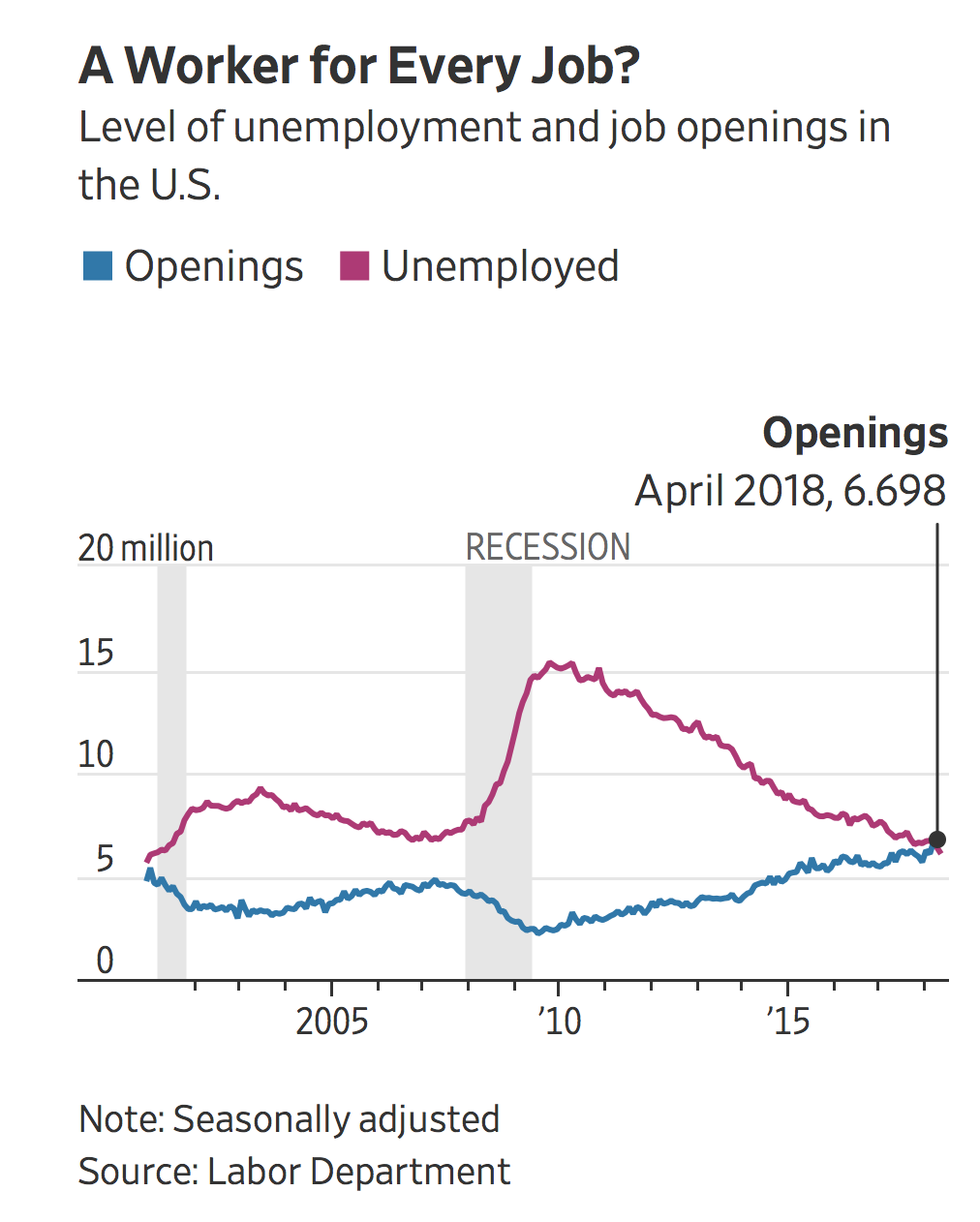 The labor market is forcing employers to rethink their approach to hiring, said Terri Greeno, owner of an Express Employment Professionals office in Crystal Lake, Ill. She is asking clients if they are being realistic in their demands for workers with clean criminal histories and higher levels of education.

“Is it a health and safety issue? If not, you have to ask if those demands are really related to the outcome on the job,” Ms. Greeno said. “When the unemployment rate is this low, you’re really competing for workers who already have jobs.”

Her staffing firm is taking extra steps to fill light industrial and office jobs, reaching out to 45,000 people it has placed in positions in the past 15 years and asking if friends or family would be willing to take on work.

“This is a very tight labor market,” said Adam Kamins, a senior economist at Moody’s Analytics. “Most everyone who wants a job has one.”

For workers, that’s good news. On the other hand, a tighter labor market presents several challenges to businesses. If they can’t find workers to meet the demand for their products, they can’t help the economy grow. They may instead opt to close the restaurant early or not run a third shift at the factory.

Firms may need to pay more to attract workers, and some already are. That raises costs and would cut profit margins if higher prices can’t be passed on to customers. If prices are raised, that stokes stronger inflation, which already has been accelerating in recent months.

Federal Reserve policy makers are watching closely. Emergence of worker shortages and stronger inflation could signal the economy is overheating, raising the need to lift interest rates more aggressively than the slow, moderate path they have signaled.

For now, the market is opening up possibilities for those who have struggled in recent years. Geremy Mincey, 26 years old, had bounced between temporary jobs since dropping out of college seven years ago, working at factories, fast-food restaurants and even as the mall Easter Bunny. He would often go months between paychecks.

Earlier this year, he landed a temporary job as a saw operator at Williams Metals and Welding Alloys in Birmingham, Ala. Last month, the firm asked him to take a full-time position with health benefits and retirement savings.

“I feel like I broke the cycle,” he said.

There are, however, still an elevated number of Americans who are stuck in part-time jobs and would prefer full-time work. And others are employed but not in the jobs they want.

Those include John Matous, a 38-year-old who works at a McDonald’s in Mason City, Iowa. He is an Army veteran with an associate degree in medical administration from a local community college. He would like to work at doctor’s office but so far has been turned down.

“I just need a chance to prove myself,” he said.

Meanwhile, the share of Americans who are working or seeking work has generally declined for almost two decades. That gives employers fewer potential workers to draw from, but also suggests there remain hundreds of thousands of Americans who could be drawn back into the labor force.

And they may be waiting for better wages. Hourly pay for nonsupervisors rose 2.8% in May from a year earlier, the best annual gain since mid-2009. But the last time unemployment was as low, wages for those workers rose 3.9% from a year earlier.

The largest number of April openings, 1.3 million, were in the broad business-services sector, which includes everything from accountants and software developers to temporary staffers and clerical workers.

There were also ample job openings in some of the lowest-paying fields. There were 844,000 accommodation and food-service jobs open in April and 735,000 unfilled retail positions.

To attract workers, the Saladworks restaurant chain has raised its starting wages about 5%. It also has relaxed standards on tattoos and piercings, allowed employees to wear jeans and bandannas, and gotten more flexible about schedules.

“If you tell someone they can’t have Friday off for prom, they’ll quit,” Chief Executive Patrick Sugrue said. “They know they can find another job on Monday.”

Write to Eric Morath at eric.morath@wsj.com

Labor Participation Rate dropped to 62.7%, still large pool of workers who could step into the job market.

Unemployment Rate Falls to 18-Year Low; Solid Hiring in May

WASHINGTON—The U.S. labor market was firing on all cylinders in May: the unemployment rate fell to an 18-year low, employers added jobs at a faster pace and wages modestly improved.

The unemployment rate ticked down to a seasonally adjusted 3.8%, matching April 2000 as the lowest reading since 1969, the Labor Department said Friday. Nonfarm payrolls rose a seasonally adjusted 223,000 in May, a jump from gains from March and April. Average hourly earnings ticked up to a 2.7% from a year earlier—and raises were even stronger for nonmanagers.

“It’s pretty hard argue that the labor market is anything but right in the sweet spot,” said Dan North, chief economist at Euler Hermes North America. “There is tremendous demand for labor right now.”

U.S. employers have added to payrolls for 92 straight months, extending the longest continuous jobs expansion on record. And those gains are extending to all corners of the labor market.

The unemployment rate for women, 3.6% last month, was the lowest since 1953, when far smaller share of women sought jobs. The jobless rates for blacks, Latinos and those without high-school diplomas are trending near record lows.

Wages for nonsupervisor workers are rising at a faster rate than overall wage increases for the first time since 2014. The nonsupervisor increase, 2.8% in May from a year earlier, was the best annual gain since mid-2009, when the recession just ended.

“The tight labor market is putting employers under enormous pressure to invest as much as necessary to retain their best employees and attract the best talent,” said Rebecca Henderson, chief executive of employment firm Randstad Sourceright.

The historically low unemployment rate and growing wages should keep Federal Reserve policy makers in line to raise the central bank’s benchmark interest rate at a meeting later this month. Consumer inflation has strengthened in recent months to reach the Fed’s 2% annual target, another factor likely keeping the central bank in line to gradually lift rates further in an effort to make sure the economy doesn’t overheat.

One factor holding wage gains in check is the ability of employers in the past year to bring Americans who have been out of the labor market back into the workforce and dissuade existing employees from retiring or otherwise exiting.

In May, the share of American adults working or looking for a job edged down to 62.7%, but the share with jobs ticked up to 60.4%. Labor-force participation is up slightly from a recent low in 2015, but still near the smallest share of adults participating since the late 1970s 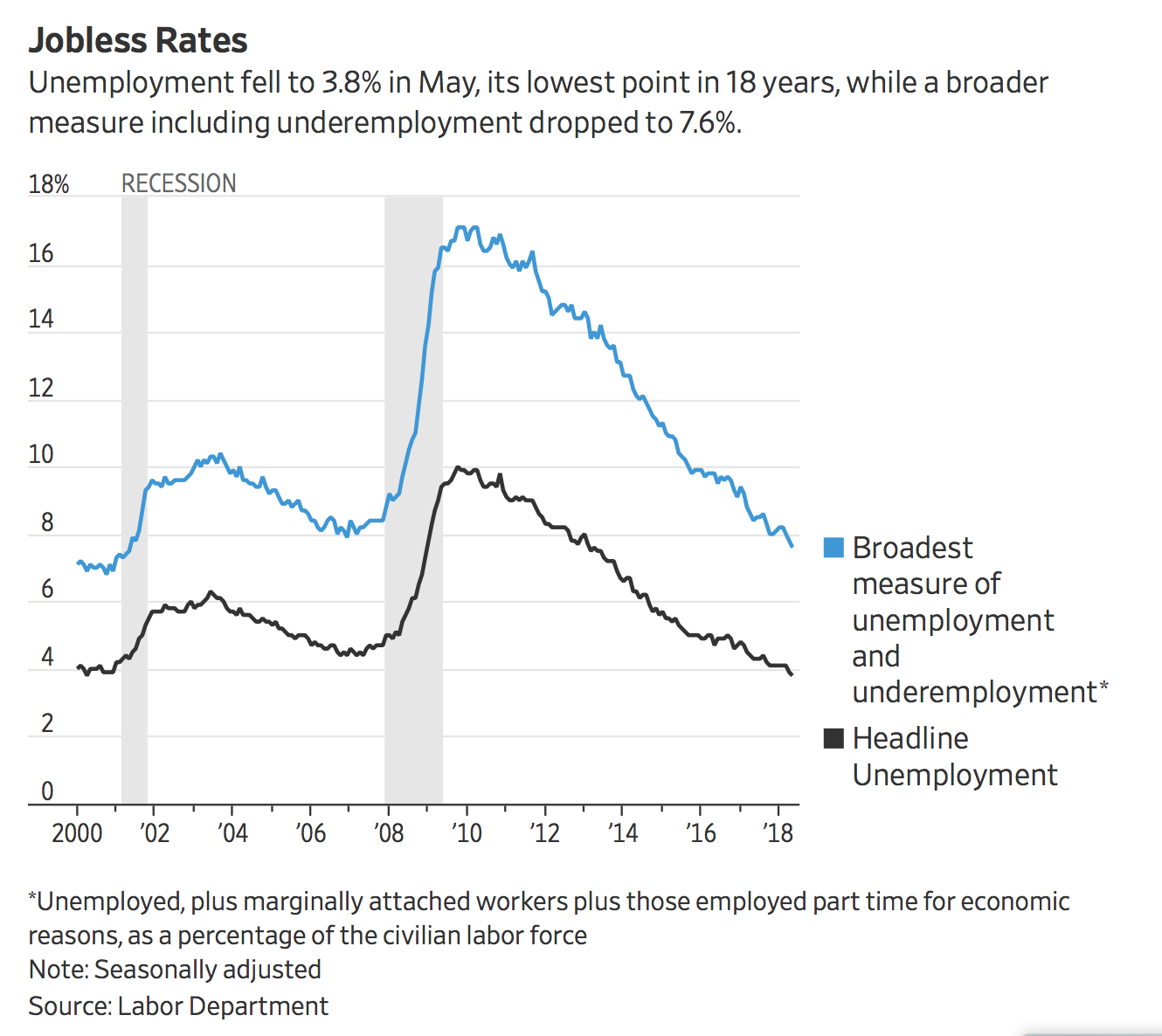 A broad measure of unemployment and underemployment that includes Americans stuck in part-time jobs or too discouraged to look for work fell to 7.6% from 7.8% the prior month. That rate, known as the U-6, remains somewhat elevated compared with the last time unemployment was similarly low. In April 2000, the broader measure was 6.9%.