The effect of student debt on the economy has been debated in recent years, as the total has soared to $1.5 trillion, surpassing Americans’ credit-card and car-loan bills. Congress and various White House administrations have pointed to federal student loans as a key way for Americans to pay for college and boost their career earnings. Critics have said the debt is damaging the economic prospects of a generation of Americans.

The Fed research published Wednesday didn’t offer a verdict on those assertions. But it showed that student debt is linked to key life decisions for some—including whether to buy a home and where to live.

Homeownership among people ages 24 to 32 fell 9 percentage points, to 36% from 45%, between 2005 and 2014, the Fed said. While many factors affected the homeowner rate, the Fed said 2 percentage points, or about a fifth, of the decline was tied directly to student debt. That translated into 400,000 borrowers who could have owned a home by 2014 but didn’t because of student loans. 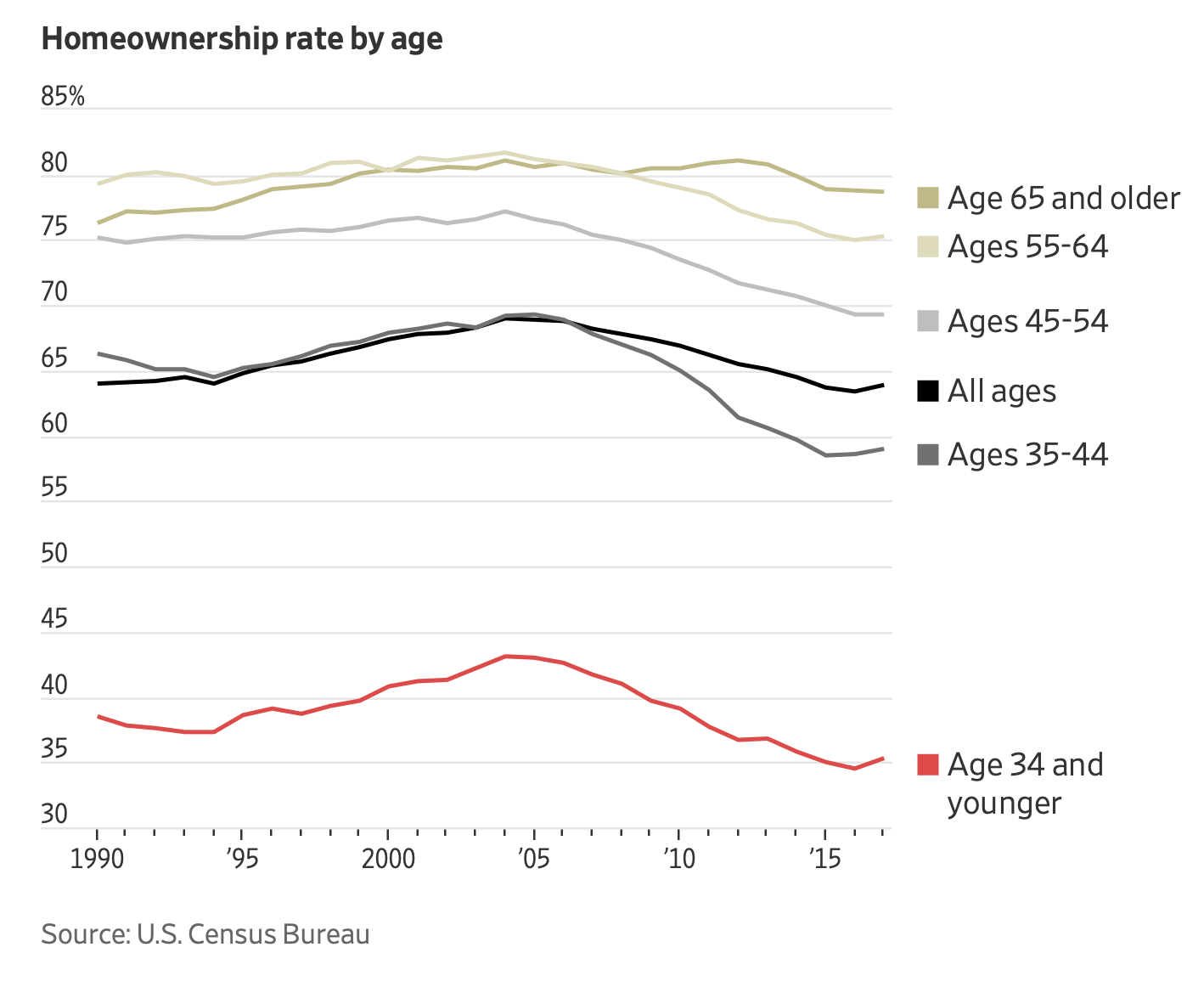 The Fed researchers pointed to at least two effects. First, many borrowers fell behind on their student loans and damaged their credit, hurting their ability to qualify for mortgages. Second, many others have good credit but are unable or unwilling to save for a down payment on a home because they funnel a chunk of their disposable incomes toward student debt. … 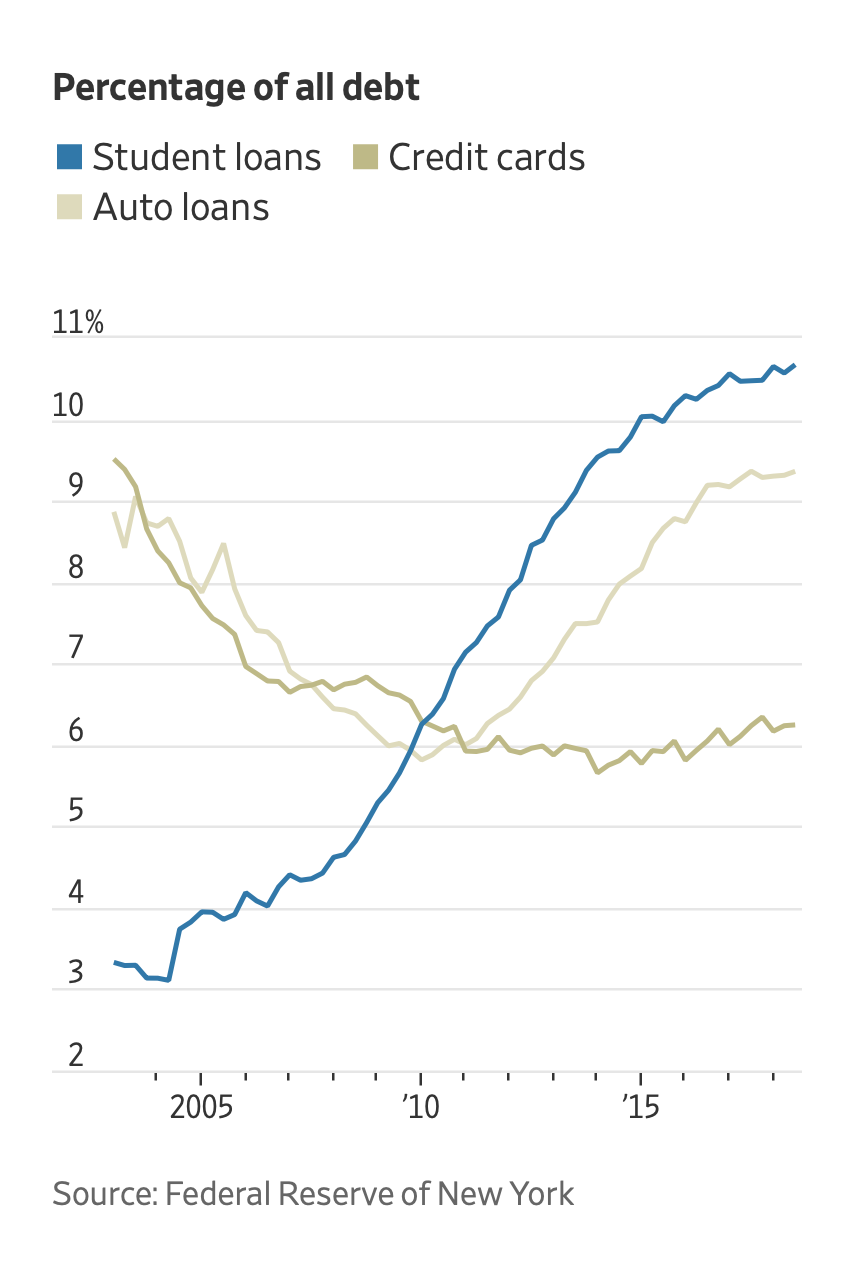 A separate Fed paper Wednesday showed Americans with student debt are leaving rural areas in droves. Half of all student-loan borrowers in rural areas moved to urban areas within six years of taking on their debt, according to the study, which used a sampling of data from a credit-rating firm and Social Security numbers to track the borrowers.

“While investing in postsecondary education continues to yield, on average, positive and substantial returns, burdensome student loan debt levels may be lessening these benefits,” the Fed researchers wrote.

The reports shed light on two of the economy’s biggest puzzles in recent years. The housing recovery has been historically weak and the fortunes of rural communitieshave lagged behind those of urban areas.

Research on the effect of student debt on homeownership has been mixed. Some economists have found that even with the burden of debt, the wage boost from getting a college degree still makes it easier for many borrowers to buy homes.

“Basically the only way to get your foot in the housing door is to have a degree, even if it comes with debt,” said Ralph McLaughlin, deputy chief economist atCoreLogic Inc.

Skylar Olsen, director of economic research and outreach at Zillow, said student loans are combining with high rents and rising home prices to make it difficult for younger households to save for down payments. “It’s a one-two punch,” she said.

Over the past couple of years, lenders have been making a larger share of loans to borrowers who spend more than 45% of their monthly pretax income on their mortgage payment and other debt, including student loans. The mortgage industry is experimenting with various initiatives to address concerns that student loans make it difficult for millennials to purchase their first homes.

The new Fed paper studied borrowers during a period—2005 to 2014—when delinquencies on student loans soared. Since then, many borrowers have enrolled in plans that reduce their monthly bills by setting payments as a share of their incomes. These income-driven repayment plans have been linked to a decline in delinquencies. The Fed research doesn’t address whether this development has diminished the effects of student debt on homeownership, which has picked up among young Americans in the past year.